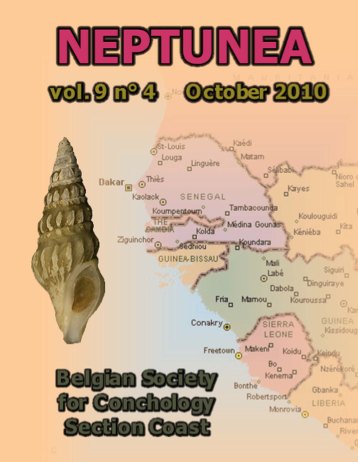 Pusionella haasi Dautzenberg, 1912 should merely be regarded as a junior synonym of Pusionella valida (Dunker, 1852). This conclusion was made after an extensive study of the turrids in the collections of the MNHN.

The presence of Laevicardium pictum (Ravenel, 1861) (Mollusca: Bivalvia: Cardiidae) off São Tomé and Principe, Gulf of Guinea, by Frank Nolf.

The species ‘Liocardium pictum Ravenel, 1861’ is insufficiently known as stated by Hylleberg (2004), especially because the type is lost. This species is known from the West Atlantic (Bermuda to Brazil), but this paper reports its presence at the Islands of São Tomé & Principe in the Gulf of Guinea confirming sporadic earlier observations not yet published.

Specimens of an unusual species belonging to the family DRILLIIDAE were found in fairly deep water off the coast of Senegal. They proved to be different from any other species of West African turrids. Therefore, a new genus Trachydrillia and a new species Trachydrillia denizi n. sp. are created, described and figured.

Confirmation of the presence of Calliostoma gubbiolii Nofroni, 1984 (Mollusca: Gastropoda: Calliostomatidae) in the north of Angola, by Frank Nolf & Frank Swinnen.

The present paper reports on two specimens of Calliostoma gubbiolii, trawled by Belgian fishermen (PEMARCO), off Quicombo (North Angola) in the second half of the previous century. This confirms the important range extension mentioned by Rolán & Ryall (1999). In fact, C. gubbiolii is usually only known from a relative limited area between the south of the Iberian Peninsula and the Canary Islands. It is here compared with the similar Calliostoma hernandezi Salazar & Gubbioli, 1993, which cohabits in the southern part of its geographic area and at the same depth.