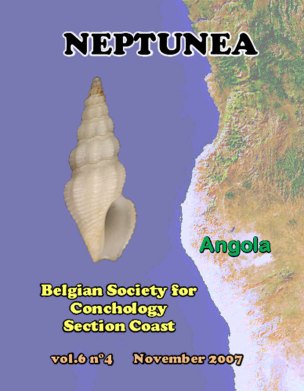 In the last decade a number of shells have been offered as ‘Drillia angolensis Odhner, 1923’. In fact it rarely happens one of them is really that species. The shells are at present known from a somewhat restricted area off Luanda, Angola. Specimens of the new species Drillia annielonae present a certain similarity to D. angolensis, but are more elongated. They are uniformly white coloured or provided with brown colour between the white oblique costae.
Furthermore, a lectotype for the controversial species D. angolensis is introduced.

A new turrid species, apparently similar to Clavatula mystica and C. regia, is described from Senegal, Gambia and Ivory Coast. The species is dark orange or olive-brown coloured and is provided with a large number of oblique ribs on the last whorl of a small shell.

Typical specimens of Clavatula mystica (Reeve, 1843) have been found in Abidjan (Ivory Coast) and Ambriz (North Angola), which means a serious range extension compared to the geographic distribution described by other authors (Boyer & Hernández, 2004). These individuals are completely similar to those from NW Africa, but as no other specimens have been described from the Gulf of Guinea until now, only a provisional expansion of the real distribution of this species can be stated at present.