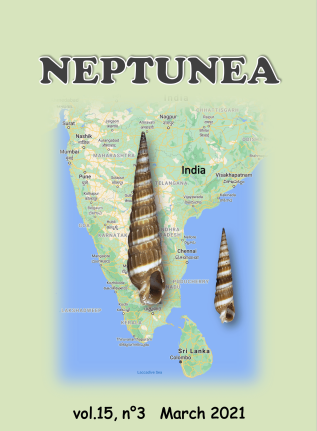 Abstract: Euspira lemaitrei (Knudsen, 1976) was originally described from the Northern Cape, South Africa. Specimens offered in the past decades reveal its presence along West African coasts even as northerly as Mauritania. This species is also known under the junior synonym Euspira massieri Petuch & Berschauer, 2018. It has often been confused with Euspira fusca (Blainville, 1825), which is a more common sand dweller living from the British Isles in the north to Angola in the south.

Abstract: Venus verrucosa Linnaeus, 1758 is an inhabitant of East Atlantic waters from W Scotland to South Africa. A population of smaller, shorter and more globose specimens seems to be endemic to the Cape Verde Islands but similar shells have been recorded from other areas (Gabon, Angola). They are called Venus simulans G.B. Sowerby I, 1844. Recently the same shells have been once again described under the junior synonym Venus damasoi T. Cossignani, 2015. The present paper provides an overview of the variability of Venus verrucosa in East Atlantic and Mediterranean waters, resulting in the conclusion that Venus simulans is neither a separate species nor a subspecies of V. verrucosa. It should be regarded as a form of Venus verrucosa, since similar forms are found in Gabon and Angola.

Abstract: Duplicaria franknolfi sp. nov. is described as new and compared with its morphological kindred species.

Hastula matheroniana (Gastropoda: Conoidea: Terebridae) revisited, with the description of a new species and the rediscovery of a neglected taxon, pp 29-36, pls 1-3, by Yves Terryn.

Abstract: The taxon Hastula matheroniana (Deshayes, 1859) is re-evaluated together with its historical synonyms of which at least one taxon can be validated and an additional new species can be described. A historical W Atlantic taxon Terebra crassula is reinstated in its correct status as a separable tropical SW Indian Ocean Hastula species.